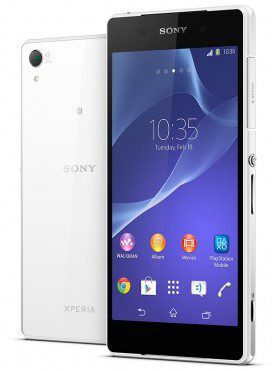 The Sony Xperia Z2 was announced in February 2014 and expected to release sometime in March 2014. The device will use a micro-sim card and comes in black, white and purple. This is a pentaband device, once unlocked it will work with any carrier worldwide. You’ll also get the typical features available with every phone nowadays; wi-fi, portable hot spot, bluetooth, NFC, GPS, built-in FM radio and java script enabled.

The Z2 features a 5.2″ IPS LCD, multipoint touch screen that supports up to 10 fingers. This display will be built with HD Triluminos and X-Reality for mobile which will produce sharper and clearer high resolution pictures. The screen is made of shatter proof and scratch resistant glass. The body itself is dust proof and water resistant over 1 metre and 30 minutes.

This Xperia device will be realeased as a 16GB version. The memory is expandable up to 64GB with a micro SD card and includes a 3GB RAM. It will also include a 20.7MP camera with HDR and LED flash with panorama picture capability. It also has a front-facing camera at 2.2MP and a 1080p camcorder on both sides. Like all Sony devices, this camera is built with Sony’s Exmor RS which reduces noise for clearer productions. It also includes Sony’s award-winning G lens; these lens capture more light in darker conditios producing stunning pictures in any light.

The Z2 will be released with Kit Kat 4.4.2 but no confirmation yet whether it will be upgradeable after. The Z2 will come with a Qualcomm Snapdragon, quad-core, 2.3 GHz processor for lightning speed browsing and navigation on this device. It also comes with Adreno 330 for the best gaming experiencing. Like a lot of Sony devices now, it will have a non-removable Li-Ion 3200 mAh battery. This will give you up to 740 hours on standby and up to 19 hours of talk time. If you need more battery, take advantage of their Stamina Mode. Another exclusive Sony feature which allows you to manage your battery.