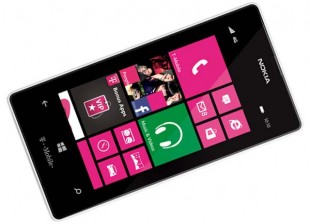 The Nokia Lumia 521 was released in April 2013 and is exclusive to T-Mobile USA. The Lumia 521 is available in red, yellow, cyan and white. It has 8GB of internal memory and can be externally expanded up to 64GB. The Lumia 521 has a 4″ IPS LCD touch screen with scratch-resistant glass. It also has a 5MP camera with a 720p video recorder. Unfortunately it does not have a front-facing camera. The Lumia 521’s Qualcomm Snapdragon, dual-core processor makes this model one of the fastest Windows devices when the phone was first released. Along with the Adreno 305, you can do everything on this minimalistic smartphone including gaming! True to Nokia, the Lumia 521 also has a FM Radio and supports GPS/Maps without a data connection. Once unlocked, this device will work with compatible GSM service providers only.

Unlocking your T-Mobile Nokia Lumia 521 is fast, simple and 100% guaranteed by Cellunlocker.net.

Why Unlock your T-Mobile Nokia Lumia 521 with Cellunlocker.net?

* Easily switch Sim cards between GSM Carriers using the same Nokia phone
* Our Automated system will E-Mail you the Lumia Unlock code
* If you are travelling, buy a local SIM card and save on roaming fees
* Unlock your Nokia device from the comfort of your own home fast and easy
* No complicated rooting, software, or cables required
* Simply enter the 8 or 20 digit Sim Pin or Unlock Code we e-mail you
* There is absolutely no risk of damaging your Nokia phone by unlocking it.
* Cellunlocker.net Guarantees Lowest price and Fastest Turnaround time
* 100% Guaranteed, if we cannot unlock your Nokia Lumia phone we will refund you

How to Unlock Your T-Mobile Nokia Lumia 521

Make sure your device is not hardlocked prior to ordering!