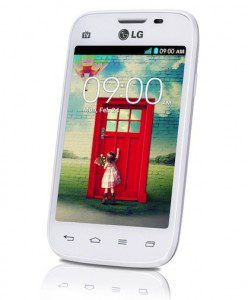 The LG L40 was announced in February 2014 and expected to release sometime during Q1 in 2014. It will be a GSM device with tri-sim capability – mini-sim cards only. As the device has not yet launched and has no release date, the specifications are still not confirmed. This model has not yet been confirmed to have the following features: wi-fi, bluetooth, portable hot spot, GPS, built-in radio, or NFC. What we do know, is that it will have a java emulator and it will be released on Kit Kat 4.2.2 in white and black.

The L40 is designed to be a user friendly, entry level, Android device. It will have a 3.5″ IPS LCD, multi-point touch screen. It carries 4GB of internal memory, with no word yet on whether it is expandable, and a 512MB RAM. It will also feature a 3.15MP camera with a camcorder but no front-facing camera. On the upside, it has a Qualcomm Snapdragon, dual-core, 1.2 GHz processor and Adreno 302. As the device has not yet been released, the specs most likely will be updated or upgraded closer to the launch.