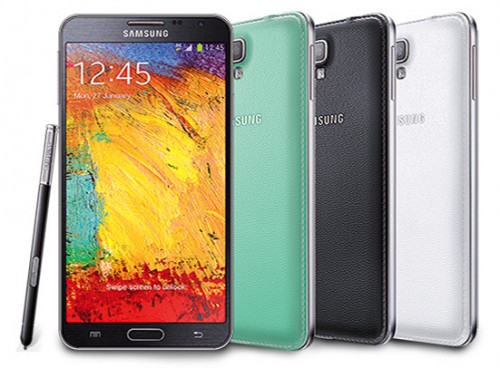 The Samsung Galaxy Note 3 Neo was announced in January 2014 and was expected to release in February. This will be a GSM device and takes a micro-sim card. This device also comes in a dual-sim version, both slots taking a micro-sim card as well. The Note 3 Neo will be released in black, white, and green running Jellybean 4.3. However, you’ll stil get your typical features: bluetooth, NFC, wi-fi, portable hot spot and of course the exclusive Samsung features (Smart Stay, Smart Pause, etc). This device unlocked will work with any compatible GSM carrier worldwide, depending on which version you get.

The Note 3 Neo will feature a 5.5″ super AMOLED capacitive touch screen. It is also a multi-point touch screen with TouchWiz UI. This device will only be released as a 16GB model, but is expandable with a micro SD card up to 64GB and features a 2GB RAM. Unlike the Note 3, the Note 3 Neo only has a 8MP camera with LED flash, panorama lens and HDR for clear, crisp pictures. You’ll also have a 1090p camcorder with a 2MP front-facing camera.

For the Note 3 Neo, Samsung has chosen an Exynos 5260 quad-core, 1.3 GHz processor with Mali-T624 GPU. Unfortunately this device does not have a built-in radio, but you’ll still get GPS and java emulator. Like the Note 3, this device wil have a removable Li-Ion battery giving you up to 540 hours on standby and up to 18 hours of talk time.