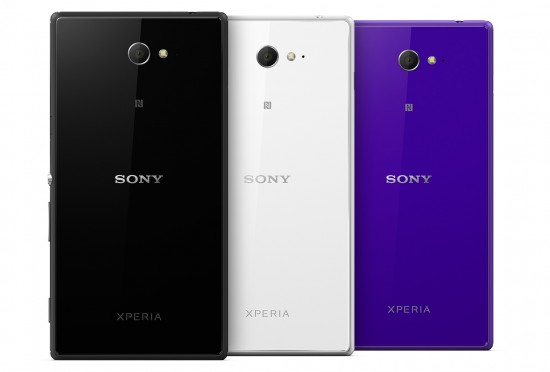 The Sony Xperia M2 was announced in February 2014 and has no release date yet but is expected to release during Q1 of this year. The device will take a micro-sim card and comes in black, white, and purple. This device unlocked will only work with compatible networks, depending on which model you get. As usual, the device will have bluetooth, NFC, wi-fi, portable hot spot, built-in FM radio, GPS, and java script enabled.

The M2 will feature a 4.8″ TFT capacitative touch screen. It will be a multi-point touch screen supporting up to 4 fingers and is made of scratch-resistant glass. The M2 will be launched as an 8GB version but is expandable up to 32GB with a micro SD card and has a 1GB RAM. It will have an 8MP camera with LED flash, panorama lens and a 1080p camcorder. Like all Sony devices, this camera is supported with HDR and Exmor RS. HDR gives you clearer photos in strong back lights. HDR will allow you to create videos in high contrast places and still produce amazing results! Exmor RS for mobile reduces noise in your pictures producing clearer and more vivid HD pictures, even in crazy lighting.

The M2 will be launched with Jellybean 4.3 with no confirmation yet whether it is upgradeable. If it is, firmware updates will be OTA (over the air). This Xperia device will come with a Qualcomm Snapdragon, quad-core, 1.2 GHz processor for faster browsing speeds in a smaller device. It will also have Adreno 305 for the ultimate gaming experiencing on a mid-range Android device.

This Sony device will have a removable Li-Ion 2300 mAh battery. A nice change from their non-removable battery devices. This battery will give you up to 633 hours on standby and up to 14 hours of talk time. If that’s not enough, don’t forget that Sony has an exclusive feature called STAMINA mode. This feature allows you to manage your battery life and is more energy efficient.