Welcome back! Today, we take a look a closer look at Huawei’s own Emotion UI. As we all know, Android is an open-platform that allows companies (as well as individuals) to work their own features onto each iteration of the operating system. Huawei preloads their Emotion UI onto Android 5.0 Lollipop, which is preloaded onto their latest intended competition for flagship phones: the P8.

Emotion UI was designed for simplicity’s sake. Having completely disregarded Android’s application drawer, all apps reside on the home screen, giving it an iPhone-like feel. The icons are all bright squares with rounded corners—even the applications you download from the Play Store. However, Huawei seems to understand that this theme may seem childish to many, so a Themes app was included to change skins. If the pre-installed 6 themes don’t please you, there’s always the ability to download other launchers such as Nova and Go to express your individuality.

Included in the things you can tweak are the home screen, navigation bar, navigation buttons’ style. An advantage Huawei users have over iOS users is the ability to add widgets on your home screen. It’s good to see that despite the heavy overlay placed over Android, Huawei kept the core concept of widgets native to the Emotion UI.

The P8 comes with an anti-virus called NQ Anti-virus. Unfortunately, it seems to be built into the OS and is not removable. We are not a fan of the fact that we can’t change this. The best that we could do was disable the application—out of sight, out of mind, right? For a UI that prided itself for customizability, the inability to remove the anti-virus software seemed counterintuitive.

Huawei evidently fixed some of Android’s inconsistencies, including changing background colours. Another improvement that we particularly liked was the timeline that Huawei incorporated into Emotion. This made everything neater and easier to check at a glance. 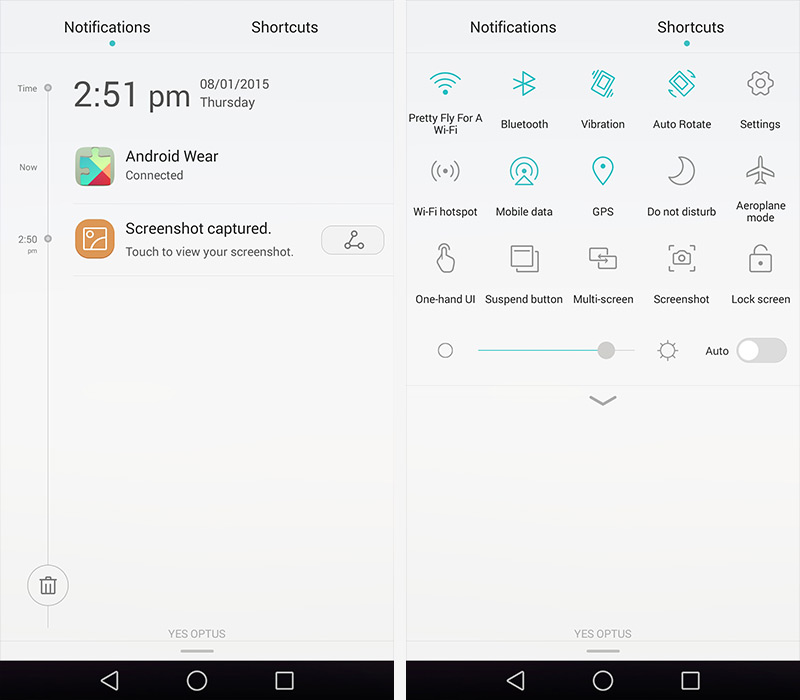 Another feature that Huawei added to their UI is a voice recording capability. You can record personal phrases in your own voice to wake up or command your P8. It’s a little finicky, but it’s a step in a good direction. With a little tweaking, we’re sure that Huawei can get this right. Another clever feature is something called voice wake up. Intended to help you find your phone, it will respond to you asking where it is, as well as play music so that you can find it—as long as your phone is lost within range.

Overall, the Emotion UI by Huawei is a pretty heavily modified version of Android. When immersed in the P8, you could almost forget that you’re using an Android device at all. Not only does the Huawei P8’s body and design evoke iPhone’s look, but their UI is reminiscent of iOS as well. Without the app drawer, the widgets are the only thing that really keeps the P8’s home screens distinctive from iPhones’. Easily modifiable and customizable, Emotion UI also fixes some of the minor inconsistencies that are found on Android. Personally, we can’t say that we’re fans of Emotion UI—but that’s likely because we are more partial to interfaces that are closer to stock Android. Emotion UI may appeal more to those who like the simplicity of iPhones but the customization of Androids. Let us know in the comments below what you think about the Huawei P8 and its usability!