Samsung has released another mid-tier smartphone called the Galaxy A8+ for 2018 and it shows Samsung’s ambition for the best. Let’s see if the A8+ lives up to Samsung’s Mid-Tier standards. 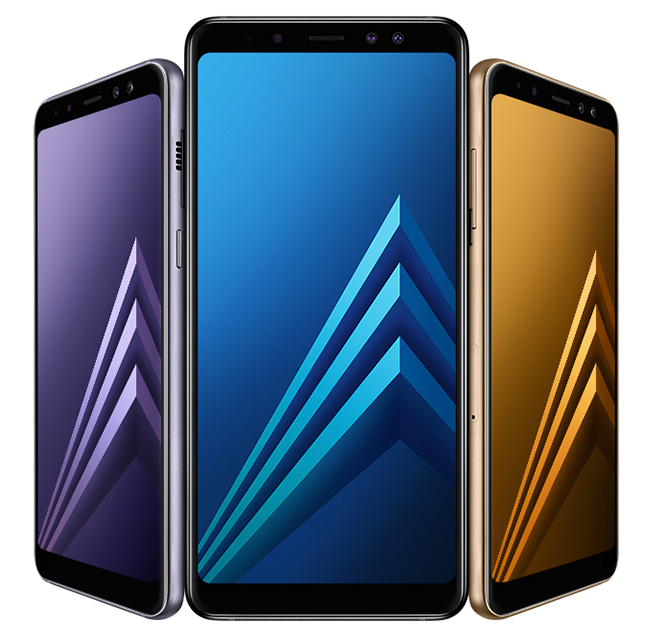 The Samsung Galaxy A8+ is Samsung’s 2018 version of their take on a mid-to-high end smartphone release. The A series sits comfortable below their normal flagship S series but we are assured that the Galaxy A series still provide the companies best screen technology and some of the most powerful camera experiences available in that price bracket.

The Galaxy A8+ is Samsung’s 4th generation mid-to-high end smartphone device made for 2018. The body is made out of premium materials giving it that good “flagship” sensation within your hands yet keeping an affordable price. As an added bonus the A8+ also boast’s some impressive camera’s on the front and back. As flagship’s become more advanced we also see more “flagship” features start to trickle down to the A series as well such as; water resistant IP68 level’s and Samsung Pay. On top of the trickled down feature’s mentioned above we also see Samsung’s own 6.0 inch Super AMOLED Infinity Display design aesthetic built into the front panel of the A8+. The resolution is measured at 2220 x 1080. Just like the S8 series and the Note8 we also see the A8+ maintain the same 18.5:9 aspect ratio and a some what near bezel-less display. Of course not everything is the same though, the display on the A8+ is not QHD+ but rather an FHD+ display which we can’t really complain about. FHD will always save more power and require less processing from your CPU compared to a QHD display. The “edge” design that appeared on recent Galaxy S and Note flagship designs aren’t present either on the A8+. However, with the presence of that AMOLED display tech we hope to see support for Samsung’s VR. The effect of the display that the A8+ possesses is impressive as long as you do not compare it to flagship level displays available today for a much higher price tag.

The unique dual selfie camera set up also may have been reason to not have curved edges like the S8 does. Rather we see a subtle curve on either side (not in the display) but the body itself where the glass meets the aluminum metal mid frame. The dual camera works together to enable that background blur effect that is becoming a manufacturer check list now a days starting with Apple. Yet, it is still cool to see Samsung employing that artificial “bokeh” selfie into their new products now. Samsung calls their version of this background blur “Live Focus”.

In terms of hardware the A8+ features a power button on the right side while the volume buttons are found on the left. The 3.5mm headphone jack (Yes!) is found at the bottom of the device along side the standardized USB-C charging port. A strange design choice is in the positioning of the speakers which is placed on the right side of the phone. The speakers are sufficiently loud but is not the most optimal placement.

The A8+ comes with a dual sim slot along with a microSD card slot as well. The first SIM slot is found on the right side of the device while the tray that takes one sim and one microSD is found at the top of the A8+. The A8+ comes with a 3,500 mAh battery pack which should be sufficient for all day usage and that FHD+ display should also suck less power compared to a QHD+ display. It will all come down to how well Samsung tweaks and optimizes their hardware and software to squeeze every last drop of that battery.

The Galaxy A8+ also comes with an IP68 rating which means that the device is water and dust resistant to a greater degree than most smartphones in its category. Both sim trays have rubber gaskets to ensure this.

Overall, the A8+ does strike that slight premium chord in very subtle ways. The design is certainly a clear jump compared to previous mid-tier devices but it doesn’t quite reach the high design of the S series nor the Note series. 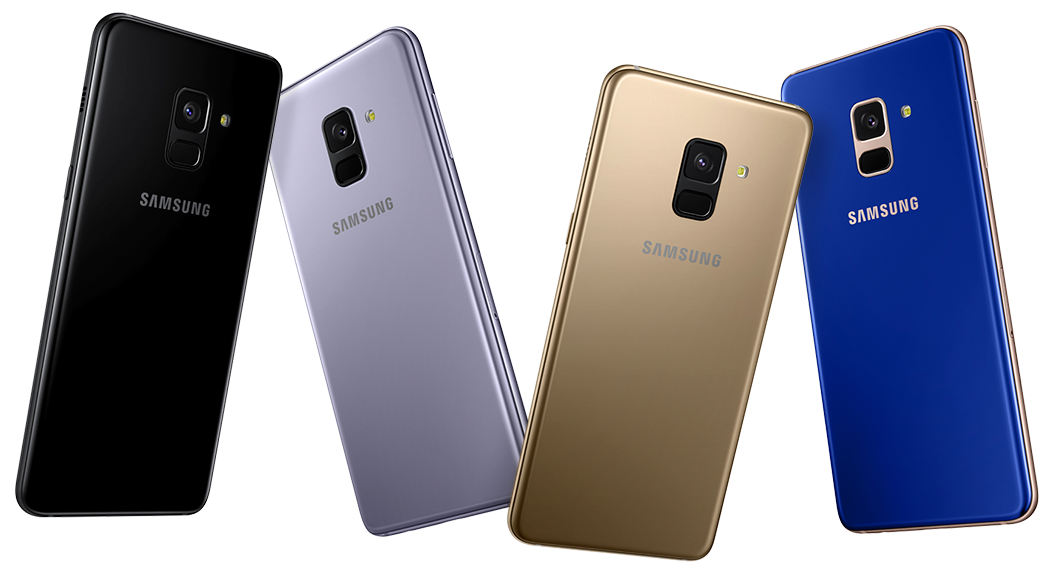 Samsung did fix the positioning of the fingerprint sensor *thankfully*. Instead of the sensor being beside the camera module it now sits below it. The chances of smudging your camera with your finger has been reduced greatly. Compared to LG this is still a bit of a stretch but it is an improvement.

Samsung also included face recognition security which is not the same as IRIS scanning on the S8 and Note8. This method detects your face to gain access or do anything with Samsung Pass. This requires adequate lighting and is not always the best method. The best method right now is still the fingerprint sensor which rests more closely to where your finger would rest behind the phone. We are just glad that Samsung did not get rid of the finger print sensor entirely.

The Galaxy A8+ is powered by the companies latest home grown Exynos 7885 Octa chip. The chip is powered by two sets of cores; one dual core high-powered Cortex A73 set which is clocked at 2.2GHz and another set which consists of 6 Cortex A53 cores running at 1.6GHz. The phone is not slow by any means but being a mid tier device there still are some odd stutters very rarely at times. This may be mostly due to Samsung’s UI so we are hoping that future updates will fix that.

Samsung Experience combined with the Exynos 7885, however, cannot compete with the likes of the OnePlus 5T nor the Chinese Mi Mix 2 which both feature the powerful Snapdragon 835 processor and optimized Android UI’s. In every day usage you won’t know that your A8+ is “slower” compared to the OnePlus 5T. Just don’t place it down side by side. Let us not forget that the A8+ is a mid-to-high end device and Samsung is targeting a more general public, not the enthusiasts. The Galaxy A8+ is an excellent choice for budget minded folks who would like a new 2018 device at a reasonable price tag that feature some of that beautiful design elements from the S8 or S8+. The A8+ will fit those needs nicely.

There are two variants that will be sold: a 64 GB (with 6GB RAM) model and a 32 GB (4 GB RAM) model. Both models will feature the same 3500 mAh battery that lasts you all day easily without any issues. We have seen screen on times of up to 4 and a half hours easily with varying degrees of usages. 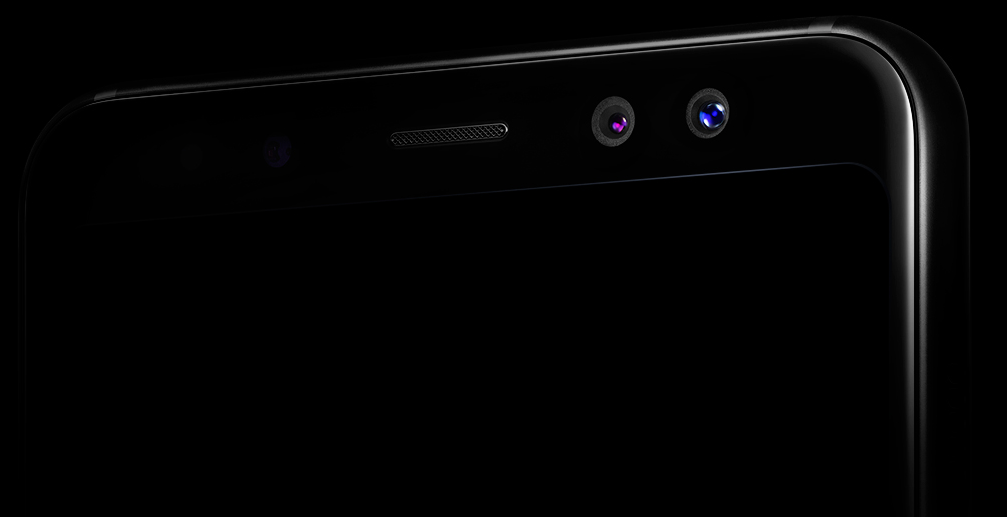 The most interesting hardware upgrade of the A8+ is in the camera department. The dual 16 MP + 8 MP selfie camera is a first for Samsung and is designed to enable the user to achieve Live Focus selfies (blurred backgrounds). The function of the second camera is to enable Live Focus which is available only on the primary camera on the S8 and Note8 devices. That’s pretty cool, a selfie with cool a cool shallow depth of field. Of course the effects of this background blur is all computational and still cannot compete with real high quality optics on DSLR or Mirrorless cameras but it is awesome to have such an option available in your pocket for selfies.

Just as you could with the S8 or Note8, you are able to readjust the level of blur even after you have taken the photo. Just slide the adjustment bar left or right to change the intensity of the blur effect. 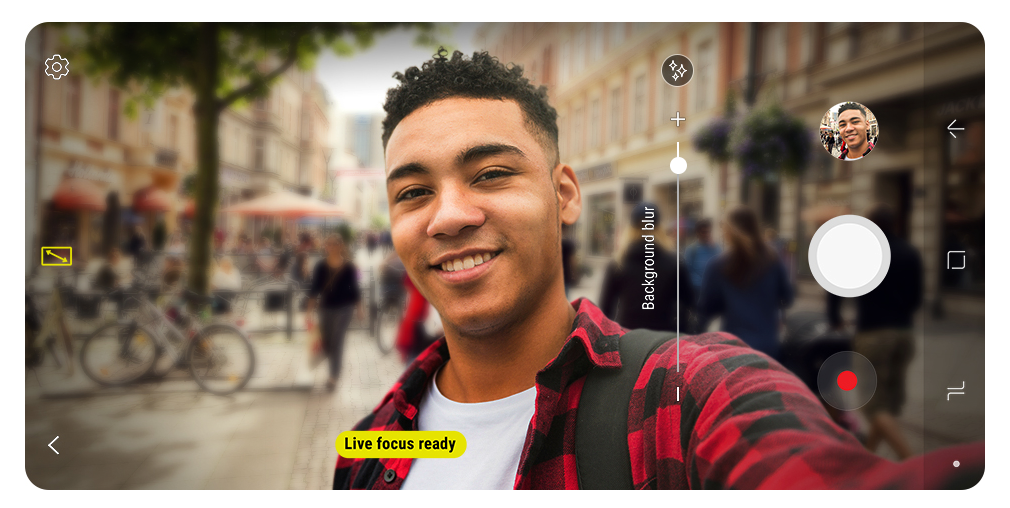 The rear primary camera is flush with the body and takes great shots during daytime. The 16MP f/1.7 sensor does not, however, come with OIS (optical image stabilization). This is very unfortunate as OIS is essential in reducing blurry photos due to shaky hands. In low light the OIS feature really shines to help in producing some sharp images. The sensor in the A8+ also seems to struggle to focus on subjects in low light scenarios as well. We aren’t surprised to see a bunch of noise show up on low light images taken on smartphones though. Those sensors are still TINY! 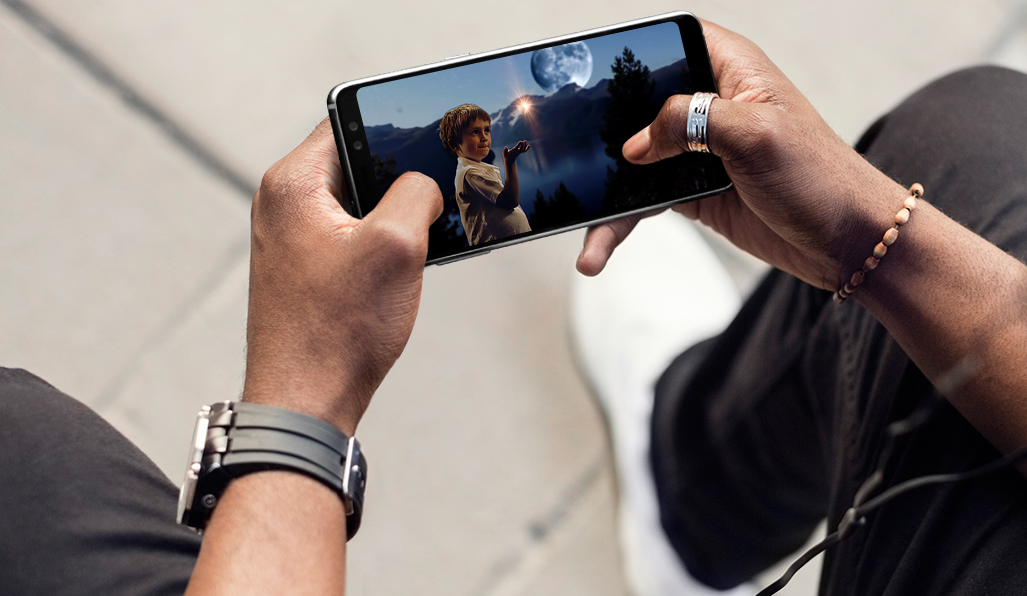 Considering all things the Galaxy A8+ is still a mid tier phone that sports some of those gorgeous modern designs that Samsung is really pushing. An Infinity Display, 6.0 inch FHD+ Super AMOLED display panel, an aluminum body, dual selfie cameras, and a battery that lasts without worrying you too much. The short coming is in it’s market position, though no doubt the A8+ is the best model in the A series line up so far but the price of $520 places the A8+ along side the likes of the OnePlus 5T and the gorgeous Mi Mix 2 with it’s ceramic body. The powerful Snapdragon 835 found in the OnePlus and the Mi Mix 2 outshines and outperforms the Exynos 7885 processor as well. Not only that but even the S8’s price is steadily dropping in preparation for the upcoming S9 announcement. Basically there are better options out there. If you are still dead set on this device, go for it, it is still a great smartphone option.

The device holds its own in the performance department and only falls short in its photographic abilities during low light scenes. The A8+ boasts a pretty premium feel and build and it is still pretty nice to look at. So our final verdict is a bit mixed yet we are leaning towards: “consider other options on the market as well for that better bang for your buck effect”.